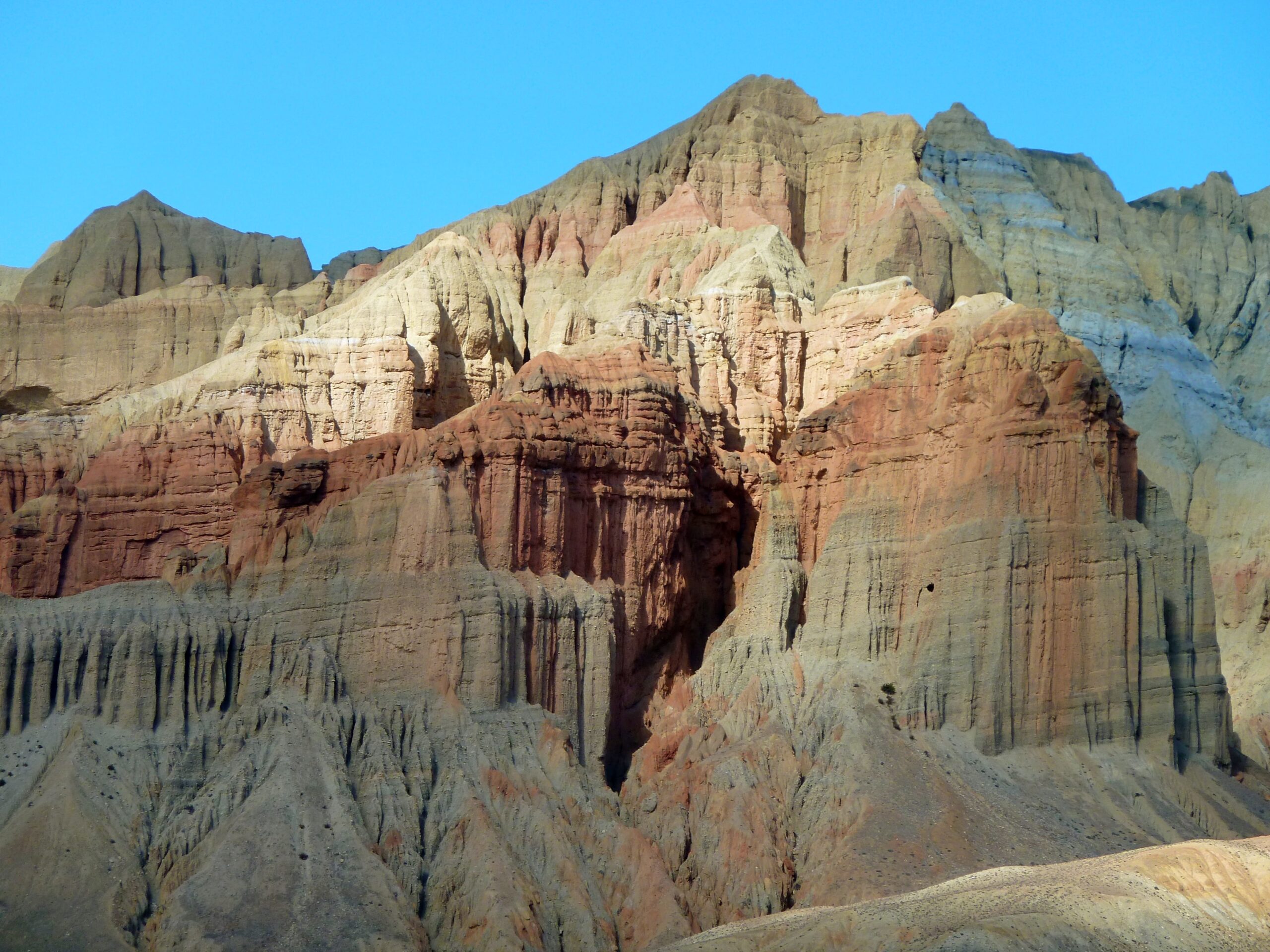 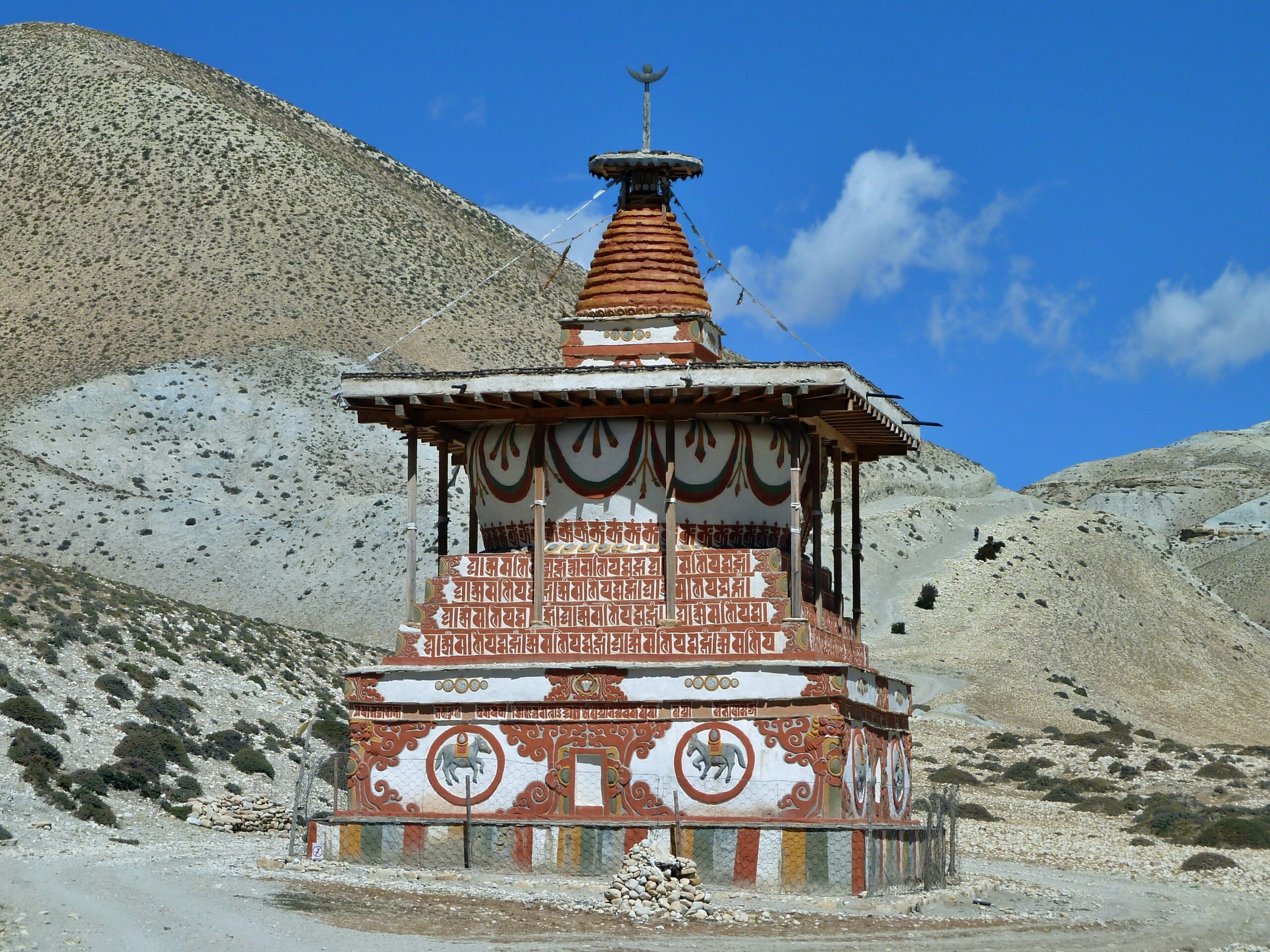 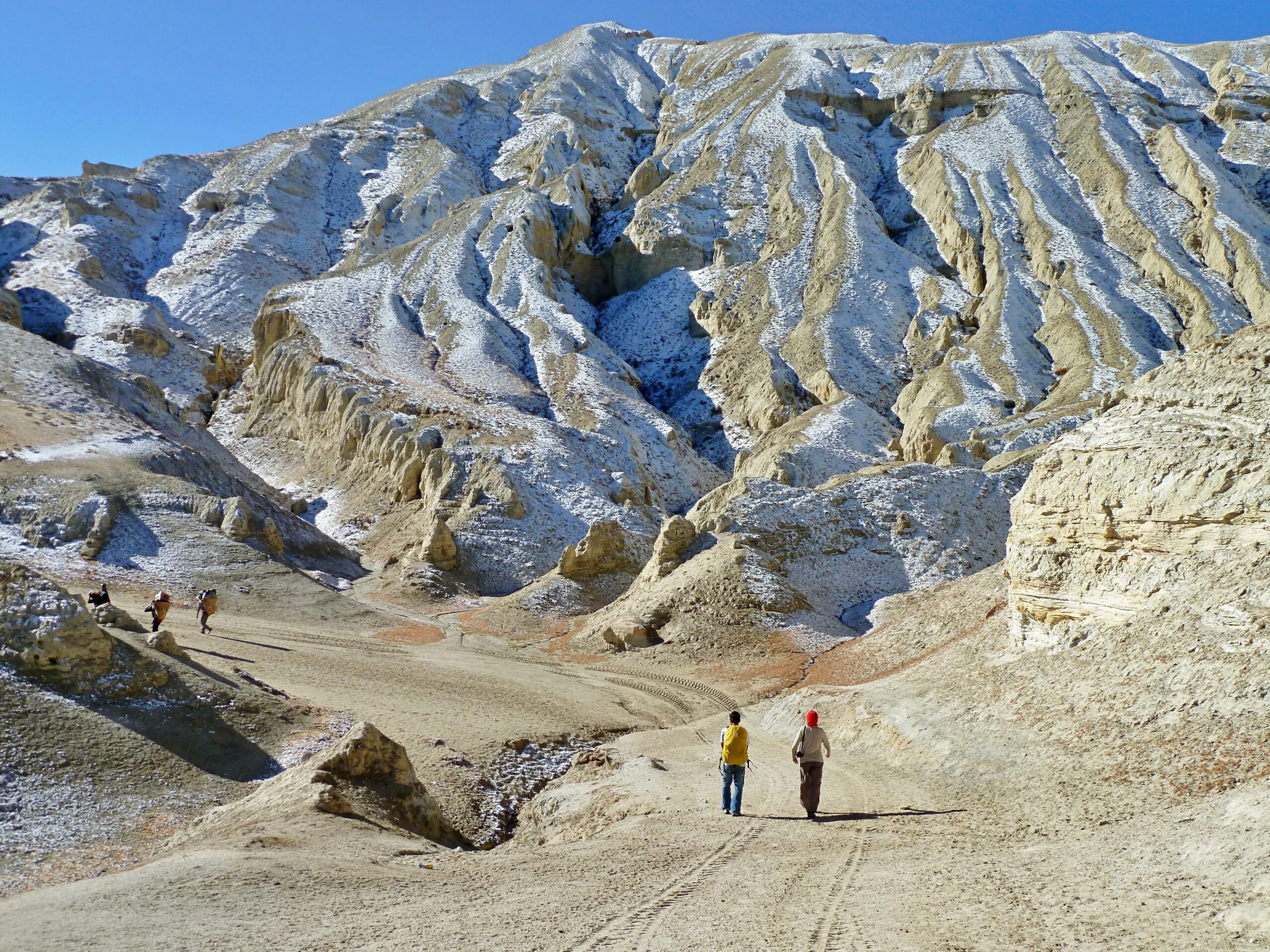 Upper Mustang Trek is a breathtaking trekking adventure through the magical  landscapes and Tibetan way of life. It is a gateway to the mysterious world of Lo Manthang, the hidden Buddhist kingdom. Lying in the rain shadow of Annapurna and Dhaulagiri range, Upper Mustang, at the average altitude of 4000m, has a diverse range of rare landscapes with cliffs and rock formations. Earning the title as the Last Forbidden Kingdom, Upper Mustang was a limited demilitarized zone until 1992, making it one of the world’s best-protected areas. In contrast to other trekking destinations, you will need to obtain a special permit to enter the area. Foreign travelers were first allowed to visit Nepal in 1992.

Upper Mustang trek starts in Jomsom and proceeds upstream until Kagbeni. This fascinating journey includes exploring caves, steep gorges, rock paintings and enjoying the panoramic views of snow-capped peaks, including Nilgiri, Annapurna, Dhaulagiri, and other mountains. The tour concludes with a visit to Upper Mustang’s confined territory Lo Manthang. As an isolated society that has remained untouched for centuries, this trek emphasizes the cultural exploration of several ancient monasteries and long-lasting Buddhist Mandalas dating back to the fourteenth century.

With steep slopes and altitude concerns, this trek is moderately difficult. The dry air in Upper Mustang magnifies altitude sickness, making it a potential risk for any trekker. Trekkers can carry out this trek during the monsoon season (June – September) with clear days and dry weather. Planning ahead of time and integrating moderate workouts with lots of cardio before the climb can make the moderately challenging uphill hike more accessible.

Along the entire trek in Upper Mustang, the trail is studded with friendly and welcoming teahouses. While the location is primarily barren, the trekking trail is lined with tea houses and lodges, giving the trekkers housing and other basic amenities.

Most tea houses offer clean and sanitary shared rooms or separate rooms, depending on your preference. In several settlements along the way, you’ll discover places to eat and drink. However, many trekkers opt to camp as well. Camping is mainly observed in restricted areas, where there aren’t adequate facilities to accommodate many people.

Despite the seclusion and remoteness of the Upper mustang trek, the region’s hiking trails are not demanding. Because you’ll be strolling along the trail that leads right to the gorge’s deepest point, the Kali Gandaki gorge path is one of the most demanding and stressful aspects of the entire journey. This trek takes roughly 17 days or less.

Though the Upper Mustang trek is always done below 4000 meters, acute mountain sickness is possible due to the constant high-altitude pressure. Nevertheless, the likelihood of severe complications is low. Trekkers must cross high passes and descend steep slopes. It is not necessary to have exceptional fitness levels or prior hiking expertise.

However, training for the trek a few months ahead of time improves your stamina, which can benefit you on the walk by reducing shortness of breath and weariness. With an average walking time of roughly 6 to 7 each day, it is estimated the trek will be moderately challenging.

Spring (April to May) is the ideal time to start trekking in Upper Mustang to unleash its unique attraction. The weather is warm and pleasant, making long treks delightful. Because of the clear skies, the trekkers can view the spectacular Himalayas. During this season, trekkers even get a chance to see Mustang’s most significant and most colorful event, Tiji Festival.

Located in the rain shadow zone, Upper Mustang is dry for most of the year. Thus, trekking is also possible during the monsoon season(June – September) without the fear of rain and muddy trails. Winter trekking is not recommended because the snow is deep, and the weather is bitterly cold. Many teahouses and restaurants are closed during winter as most locals descend to the south to escape the frizzy snow and the crisp weather.

Upper Mustang is a Restricted Area since it is so close to the Tibetan border. All trekkers entering Upper Mustang must obtain a USD500 per person Restricted Area Permit (RAP) valid for ten days. After that, the extended stay will cost USD50. This RAP is suitable from when you leave Kagbeni until you re-enter Kagbeni. Each trekker must also acquire the Annapurna Conservation Area Project (ACAP), which costs USD20 per person. Trekkers who do not have a guide with a valid license grant by the Nepalese government are not allowed. Because the Upper Mustang expedition is too challenging to complete on your own, single permits are not issued. As a result, at least two trekkers traveling with an authorized trekking company are required to obtain the permit.

The price of the Upper Mustang trek varies depending on the services you select. A shared room is less expensive than a single, double, or triple bedroom. So the cost of your accommodation is determined by the type of rooms you select for yourself. Because it is harder to get things to higher altitudes on this journey, the cost of food and lodging may be higher. On the Upper Mustang journey, meals cost between USD5 to USD20 per person. Trekking to the Mustang region could be demanding due to the trip’s entire length of 17 days. Hiring a porter is thus recommended. You can hire a porter for roughly USD20 to USD25 per day.

1) WHY WAS THE UPPER MUSTANG A RESTRICTED AREA?

The Upper Mustang trekking area is severely restricted because of its open border with Tibet. Government policies demand a special permit to enter this isolated area. Additionally, border security has been increased to deter illegal activity along the two-country border.

Upper Mustang is Nepal’s historic hidden Buddhist monarchy. For decades, the territory was restricted and isolated from the rest of the world. This location is a sanctuary for Tibetan culture and unspoiled Himalayan scenery. Saligram, which are million-year-old fossils, can be found in the area along with a range of mine resources. To prevent these heritages, the government has ruled out tight restrictions in this area.

2) IS THERE STILL A KING IN UPPER MUSTANG?

No, Jigme Palbar Bista, the late king, died in 2016, and his descendant returned to the city. Although the late king lost his royal title in 2008, the locals still respected him as the ruler.

3) CAN I TAKE PART IN THE TIJI FESTIVAL DURING MY UPPER MUSTANG TREK?

Yes, you are welcome to attend the three-day lively celebration of good triumphing over evil. Tiji, the area’s annual festival, attracts many monks, villagers, and government officials, making Lo-Manthang incredibly vibrant. You can witness huge Buddhist murals, which will serve as a place of devotion and adoration for the locals.

4) I AM THINKING ABOUT A SOLO UPPER MUSTANG TREK. WILL THAT BE POSSIBLE?

No, since Upper Mustang is a restricted area, a minimum of two people are required to obtain a permit. The upper mustang area is under the control of the Nepalese government and requires a special permit to enter. If you attempt the Upper Mustang Trek without a guide or access, the administrations will detect an illegal entry and arrest you for further investigation. Trek with a trekking company to avoid this problem.

5) WHAT ARE SOME OTHER SIMILAR TREKS AROUND THE MUSTANG REGION?

Some trekking options, such as Lower Mustang, do not require a permit and are easily accessible from the Annapurna Circuit trek. Nar Chu, a traditionally Tibetan district immediately north of the Annapurna Circuit trek, includes picturesque villages and arid slopes with a permit costing roughly USD90. Mustang Damodar Kunda trekking is another option in the region that takes you to the holiest pilgrimage. Meanwhile, lower Dolpo’s southern section offers a breathtakingly magnificent week-long trekking loop for roughly USD10 per person.

After breakfast, we will join guided tour to visit various sites in the valley - most of them listed as UNESCO World Heritage Site. Get off and browse the famous Pashupatinath Temple, Durbar Square, Swayambhunath and Boudhanath. Come back to hotel and prepare for the morning flight, drive and short trek the next day.
Included Meals: Breakfast
Accommodation: 3-Star Hotel in Kathmandu