Are you looking for Nepal Tour Package to get to know the Historical and Natural aspects of the Himalayan Kingdom Nepal? Here, we bring you Nepal Tour Package : A Complete 15 Days Package for the Best Experience to make you familiar with the tour possibilities in Nepal.

Nepal has everything – Mountains, temples, markets, monasteries, adventure, picturesque landscapes, and much more…

The climatic conditions vary from sub-tropical in the Terai region to subzero winters in the upper mountains. Spirituality has always been an integral part of this nation which has more than 125 caste and ethnic groups, and 123 spoken dialects, and is characterised as naturally pure, tranquil and culturally unique. Towering snowy peaks outline upper reaches of Nepal in a mighty sweep from 7132m Mount Api in the west to 8586m Kanchenjunga in the east.

Nepal opened her doors to the world in the 1950s and since then every holiday seeker has Nepal in his bucket list.

Arrive into Kathmandu and transfer to your hotel. The remainder of the day is at your leisure. You might like to walk into the centre of the city to explore the markets, food stalls, and drinks. Kathmandu has a lot of pubs and bars too, and the nightlife here is also tantalizing because of many nightclubs, so come back at night and enjoy a bit of nightlife.

You will find an enthralling repository of Nepalese art, history, culture and tradition when you go in for a Kathmandu sightseeing tour. The topmost tourist locations that are a must for a visitor to Kathmandu are: 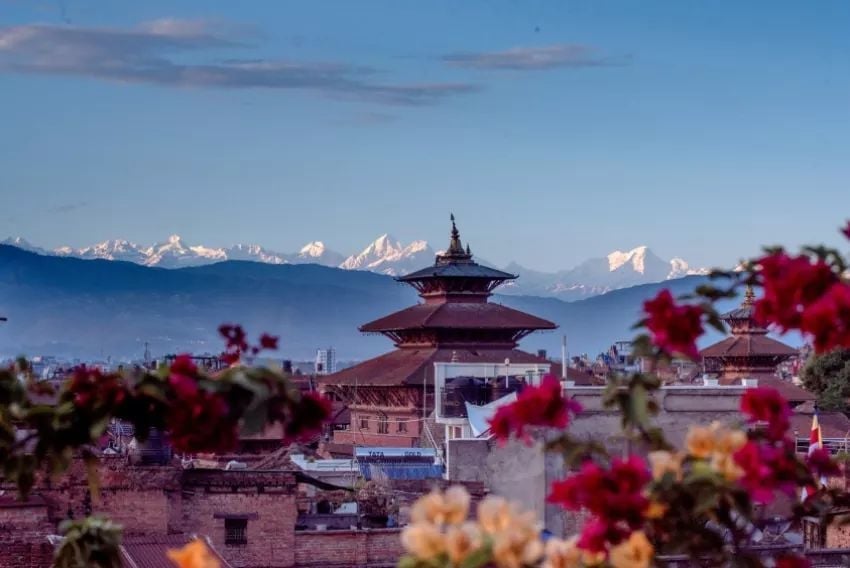 After a comfortable night at your hotel, start by exploring Thamel, a popular tourist spot in Kathmandu. It’s a commercial hub and the centre of the tourist industry in Kathmandu, a kaleidoscope of crowded space, narrow lanes, hotels, travel agents and shops selling artifacts. Thamel, in fact, is one of the most picturesque places in Kathmandu and has been the center of interest right since the Hippie days of early 70’s.

For lunch you can try out local cuisine. There were many restaurants here that serve traditional as well as Continental cuisine. Traditional Daal-Bhaat-Tarkari thali is highly recommended.

After lunch, you can drive to Kathmandu Durbar Square, also known as Basantapur or even walk down from Thamel as it is quite close to it. This way you see more of Thamel and the narrow lanes bustling with shops.

Kathmandu Durbar Square is one of three Durbars in the Kathmandu Valley and is also known as the Hanuman Dhoka Palace Complex because of the kneeling statue of the Hindu god, Hanuman. It is located in front of the old royal palace of the Nepal Monarchy. The palace itself has beautiful architecture, and houses the King Tribhuwan Museum and the Mahendra Museum.

The Durbar Square is actually made up of two sub-areas. The outer complex has some interesting temples, such as the Kumari Ghar – the home of Nepal’s Living Goddess. It also holds the Kasthamandap, Shiv-Parbati Temple, and the Jagannath Temple. Dont miss the massive statue of Kal Bhairav, representing Lord Shiva in his destructive manifestation, in an open temple.

Today explore a selection of temples including Swayambhunath, Boudhnath Stupa and Pashupatinath – a sacred Hindu temple.

Start with the Buddhist centres in town, and the Swayambhunath Temple is normally the first stop. You got to do some early morning workout as you climb 365 steps to visit the Swayambhu Temple, an ancient Buddhist Stupa situated on a hilltop. The architecture is quite breath-taking, and the massive Vajra (thunder bolt scepter) is stunning. The eyes of the Buddha are painted on all four sides of the stupa as if Lord Buddha is keeping a watchful eye on every devotee. The view of Kathmandu city is stunning from the top.

The Great Boudha Stupa is next. It is the most sacred Stupa for the Tibetan Buddhists and also a UNESCO World Heritage site. The Stupa reportedly entombs the remains of Kassapa Buddha. The soothing chants of “Om Mane Padme Hum” are mesmerizing. There are about 50 monasteries to house the monks and Tibetan refugees in the complex.

If you are feeling tired and hungry, there are rooftop restaurants here with a panoramic view of the 100-foot dome of the Boudha Stupa and try out the Nepali snacks set, Khaja, a perfect snack item.

In the afternoon or early evening hours, go and visit the almighty god, Lord Shiva’s temple, the Pashupati Nath Temple to attend the evening aarti and offer prayers. Pashupati Nath temple is a famous and sacred Hindu temple complex on the banks of the Bagmati River. There’s also a crematorium on the banks of the river. Only Hindus, Buddhists of Indian or Tibetan descent are allowed into the main Pashupatinath Temple. 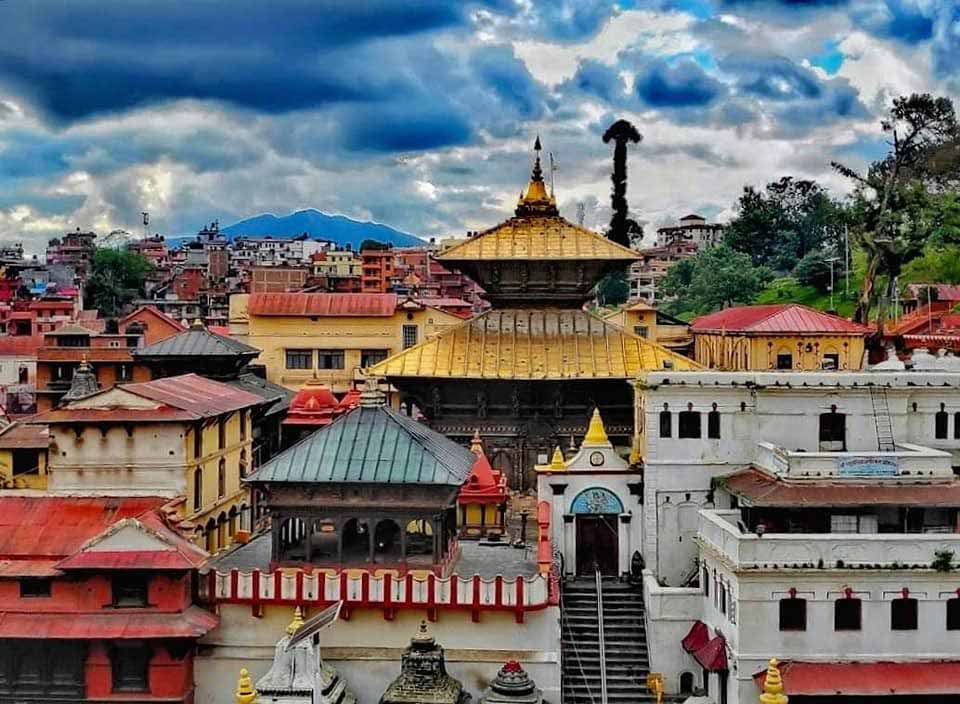 Next morning, it’s time now to explore the other two Durbars, which are near Kathmandu. You can head to Patan Durbar Square first, which is situated at the centre of the city of Lalitpur, just 7 kms from Kathmandu. It is also a UNESCO World Heritage site.

Patan is one of the oldest Buddhist cities and is also known as Lalitpur (city of fine arts). It is a centre of both Hinduism and Buddhism with 136 bahals or courtyards and 55 major temples. The three main courtyards in the palace are Mul Chowk, Sundari Chowk and Keshav Narayan Chowk. Krishna temple made of stone, five storied Kumbheshwar temple and the Golden Temple are some of the main highlights of Patan. The figures and carving made out of wood amazes the visitor and leaves one awestruck.

You can now head to the next destination, Bhaktapur Durbar Square, which is about 20 kms from Kathmandu. Bhaktapur has the best-preserved palace courtyards and is the oldest city centre in Nepal, listed as a World Heritage site by UNESCO. Bhaktapur literally means place of devotees. It was also known as Bhadgaon or by the Newari name Khwopa. 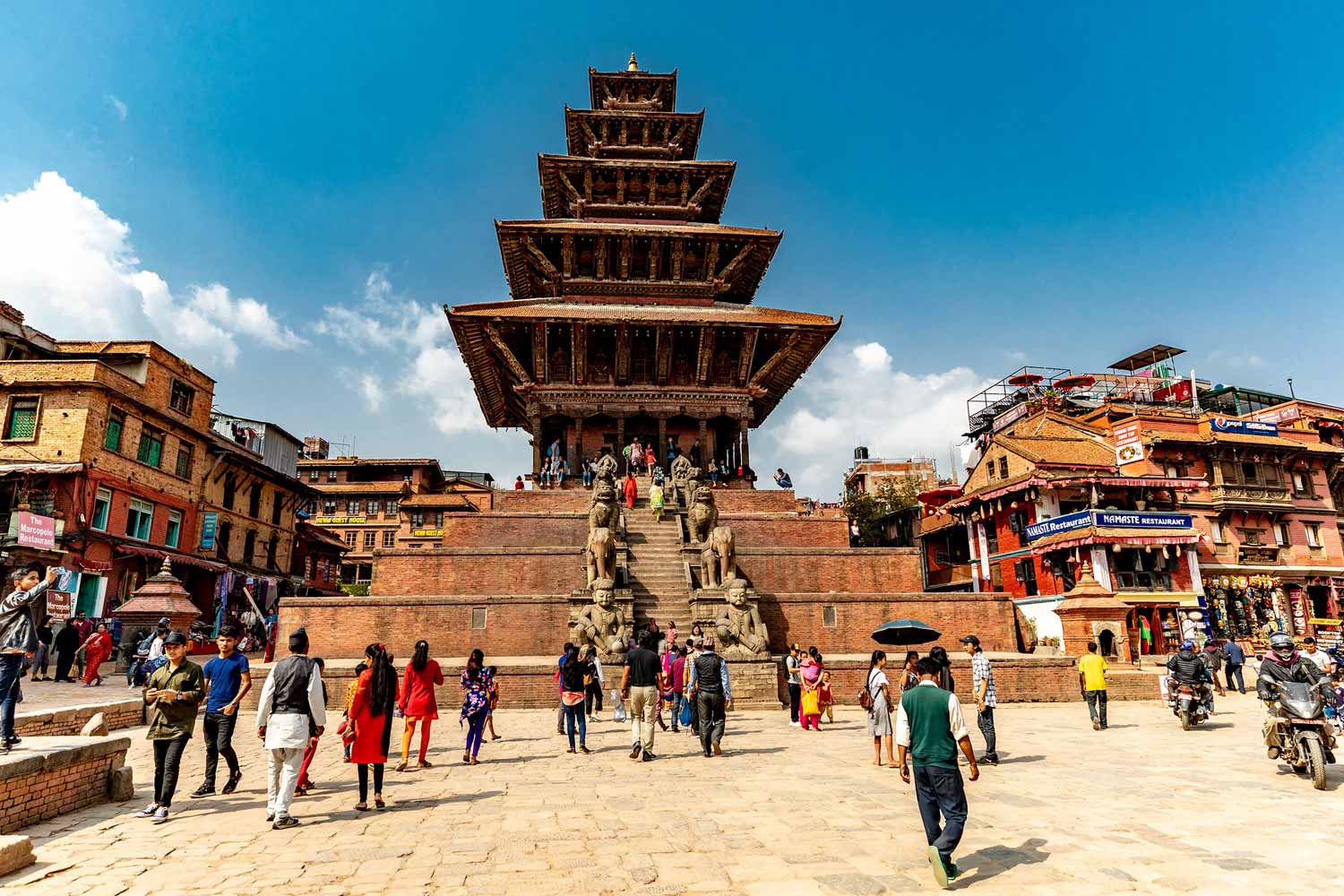 Take a short flight to Pokhara to enjoy at the second largest city in Nepal. The gateway to the Himalayas, Pokhara is full of lakes with views of the snowcapped peaks.

Enjoy the heavenly sight of the entire Annapurna range from your hotel room early in the morning. After breakfast at hotel, today visit the Gupteshwar Mahadev Gupha near Devi’s falls. The water from the falls flows into a 500 feet long tunnel into the subterranean cave where a Shiva Lingam was once discovered and enjoy the artistically painted pathways and the limestone formations inside the cold and damp cave.

The vibrant city of Pokhara has a lot to offer. You can

* Indulge in extreme sports – Paragliding, bungee jumping, zip-lining, river rafting or flying over the peaks in an ultralight aircraft.

In the afternoon, spend time boating on the misty Phewa Lake and visit the Tal Barahi temple in the lake and offer prayers to goddess Barahi. The lake is often blanketed by lavender water hyacinths and has a faint emerald hue due to the surrounding lush-green fields and forests.

Continuing to the southern fringe of the lake, take a trek to the World Peace Pagoda, a beautiful dome shaped Pagoda shining atop a hill and has four images of the Buddha facing the four directions.

Enjoy your evening and experience the night life at Pokhara, a hippie haven of the past.

In the morning, visit Sarangkot to see the sunrise over the Annapurna and Fishtail mountains, and then move to Nayapul, near Pokhara to indulge in a short duration easy trek in the Himalayas. Today, you start trekking to Ghorepani Poonhill/Annapurna View Trek.

This is a walking adventure in the Himalayan foothills of the Annapurna region. You trek in the lower mountain zones and because of the low elevations, you don’t feel the strain. The panorama of the high mountains on the vista leaves you amazed and the spectacular shining view of the Annapurna range will certainly cast a hypnotic spell. The panoramic views of the mountain peaks in the Annapurna and Dhaulagiri range are simply stunning.

The hike to Poon Hill from Pokhara takes 2–3 days to see the beautiful Himalayan Range. The sunrise from Poon Hill is particularly mesmerizing. During the trek you will stay in friendly teahouses. Annapurna South, Barasikha, Nilgiri, Hiunchuli, Machhapuchru (also known as Fishtail mountain), the Dhaulagiri mountain range and Tukuche Peak are all on show on this short trek to Poon Hill into this beautiful region.

On the 10 the evening you come back to Pokhara. 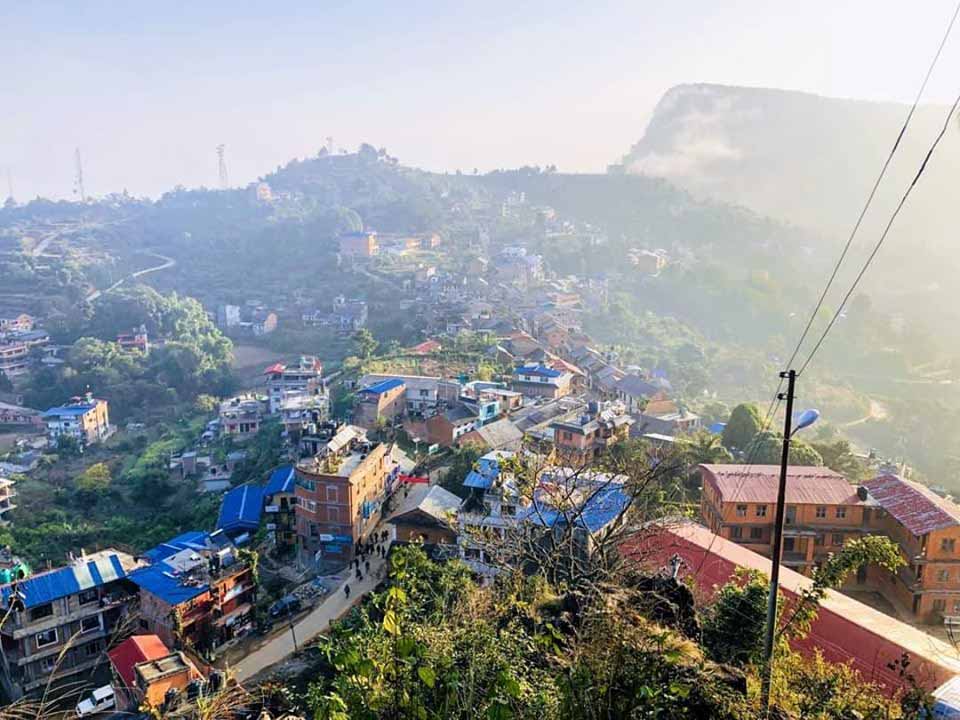 Travel to the ancient Newari town of Bandipur located between Kathmandu and Pokhara (3 hours drive form Pokhara) to experience a well-preserved town with many fine examples of 18th century architecture, as well as small cafes, shops and temples.

This is a very picturesque sight, and an example of the living and breathing abode of Newari culture in the Gandaki Zone at 1030 metres above the Marsyangdi River. Bandipur is a perfect weekend retreat from Kathmandu or Pokhara. The town has more of a relaxing vibe, with the laid-back ambience of a small European neighbourhood.

Since the opening of air-field at Pokhara, and also the construction of Kathmandu-Pokhara highway, Bandipur lost its place on the tourist map. But if you are interested in ancient culture and amazingly preserved Newari architecture, a visit ot Bandipur, also known as the “Little European Village” of Nepal is a must.

Places to Visit in Bandipur

In spite of not housing many sightseeing attractions, there are some places worth seeing in Bandipur.

Siddha Gufa: is 1.5 hours trek away from the town.

Bindebasini Temple: is an old and ornate shrine at the northeast end of Dumre bazaar, which is the main shopping lane. The shrine is dedicated to goddess Durga.

Tundikhel: is a large, green table-top ground open for the public to enjoy and relax. Tundikhel offers a spectacular view of the Himalayan range behind the houses and buildings.

Silkworm Farm: Visiting the silkworm farm, after a 2.5 km downhill hiking from the Heritage Guest House, is a unique experience.

Padma Library: near Bindebasini Temple is worth a visit because of its impressive 18th-century architecture with carved windows and beams.

Thani Mai Temple: is a small white temple at the top of Gurungche Hill, dedicated to the mother goddess. Sunrises and sunsets are exceptionally beautifully from here.

Kharga Devi Temple: is a temple for the sword of Mukunda Sen, the 16th-century Palpa King.

You can also spend the time enjoying walks along the many small streets and alleys, shop from local stores, and enjoy the native cuisine.

A few worth mentioning are

Travel from Bandipur to Chitwan National Park. On arrival check in to a wildlife lodge and have the evening to relax.

A trip to Chitwan National Park, Nepal for rendezvous with wildlife especially Rhinos can turn out to be a box full of surprises.

Experiences of a lifetime:

Today you will have a full day exploring the park. Indulge in jungle walks, river safaris and jeep safaris. In the evening enjoy a walk in the Tharu village and then enjoy Folk Dance and music by Tharu artists at the resort.

Transfer to the airport for your return flights home.

This is a sample for Nepal Tour Package. You can visit our page for the other Best Nepal Vacation Packages

We do entertain tailor made packages. Do contact us with further queries for the cost for this complete Nepal Tour Package and also for any travel needs to Nepal.

How I reached from Kathmandu Everest Base Camp in 45 Minutes