A Trekkers Lifetime Experience to Mount Everest Base Camp Trek

I guess I am not built for climbing Everest but you mus see Himalauan Wonders during EBC Trek in Nepal Instead, my dream was to make a trek to the Mount Everest base camp, which was more practical. Taking up the famous Everest base camp trek was a dream and it became a reality a few weeks back when I finally booked my package for this trek from an adventure company in Nepal. 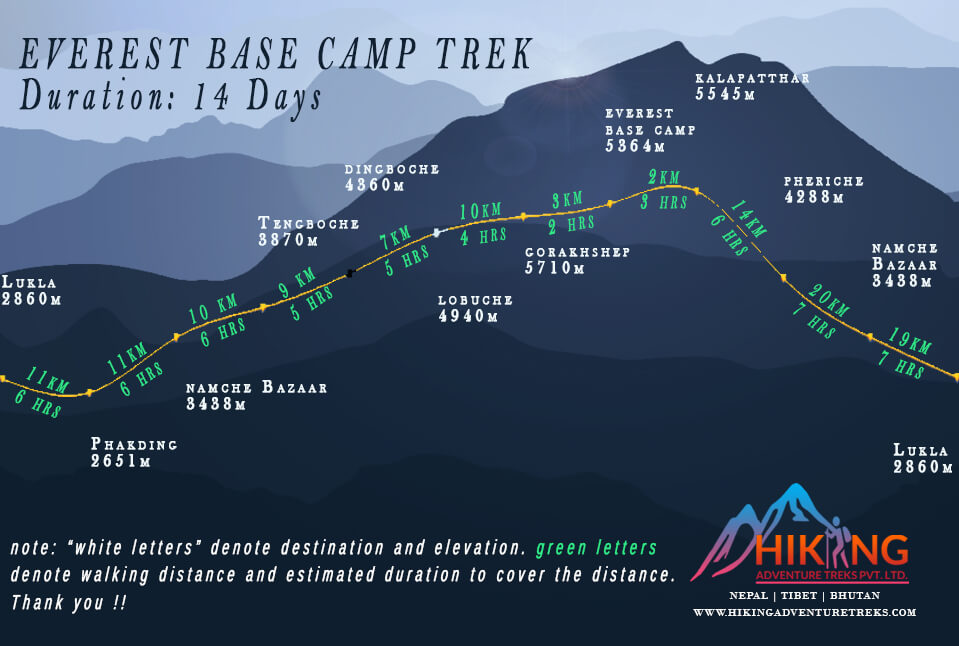 It has taken me a lot of time to get ready for this trek, a lot of physical preparations and also a lot of money. Air tickets, trekking charges, and trekking equipment, everything cost me a fortune, but who cares for money when the question is of fulfilling your lifelong dream. I was trekking towards the base camp of Mount Everest, afterall.

I arrived in Kathmandu for starting my Mt Everest Base Camp Trek. and as usual took 2 days off to acclimatize. The Company Owner Ram Barakoti took good care of my trip. I used these two days to go around and do some sightseeing in Kathmandu and also seek blessings of Lord Pashupatinath.

Flying from Kathmandu to Lukla, the ultimate flight experience 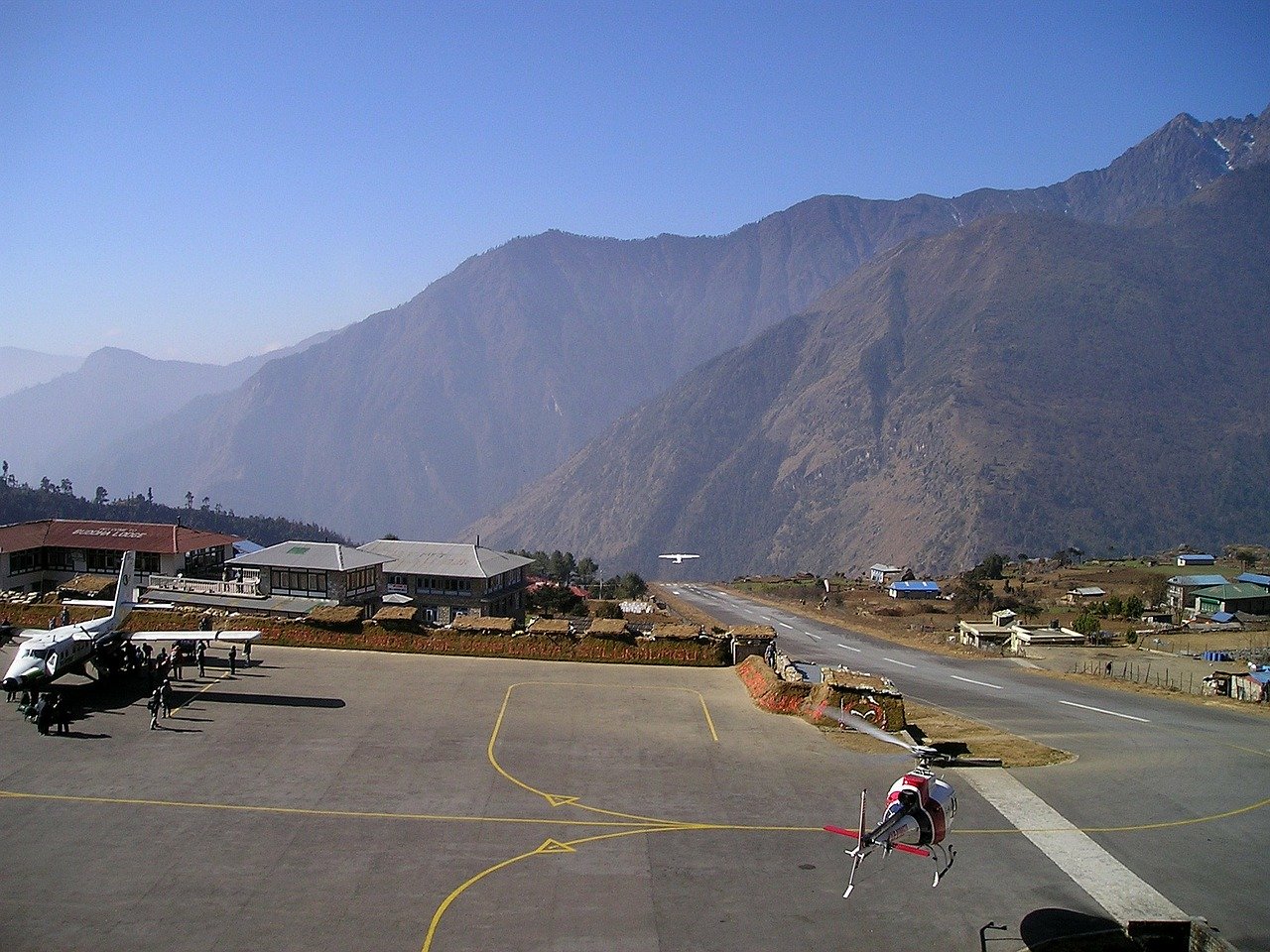 As is the case with me always, plans don’t go as planned. God always has alternative but better plans for me. It really was awful weather on the day of my start. My scheduled flight to Lukla was cancelled, so the Company arranged a helicopter and enjoyed the awesome flight over the mountains and finally after 45 minutes reached Lukla, the world’s most adventurous airport. In Lukla my guide for the trek, Mr. Bishnu, took me to the tourist department office to get my permit for the trek. I just needed my passport for documentation for this permit. Everest Base Camp Trail is contained within the Sagarmatha National Park Conservation Area.

So it was finally time to hit the roads and start our trek from Lukla to Phakding. It was a relatively comfortable trek on the first day as

Phakding is situated at a lower altitude than Lukla. I thoroughly enjoyed the beautiful landscapes during the trek. The trail was so beautiful. Phakding, along the trek trail, is a UNESCO World Heritage Site. After a 4 hour trek and crossing many villages on the road, this was my first night halt for the Mount Everest base camp trek.

It was a Zig Zag path in the hills and all throughout we had to give passes to the locals and lots of yaks and horses as well. It took 8 to 9 hours to reach Namche Bazar from Phakding. It really was a tiring trek. As we reached Namche Bazar, the first thing I did was to collapse on the bed in a lodge.

But I had not come here to rest, so after a while I came out to explore the market area of Namche Bazar. You see, there’s a lot of markets in the name of the place itself. And Namche Bazar is a locally famous market place in this remote area in the mountains.

Exploring the highlands of Dingboche and Tengboche

The next morning it was difficult for me to decide on the route for the day. There are two ways one can continue on his expedition to the base camp.  The first one is through Dingboche and the second one was on the way from Pangboche. Though these are at almost the same altitude, they are located on opposite hills.

As I normally prefer to trek on less crowded paths, I chose the route to Pangboche for going up, because it is the place where very few trekkers go. On our way to Pangboche, we visited the Tengboche monastery which is a very famous monastery in the Everest Region.

Heavy rains accompanied us on the way. The way to Pangboche from Tengboche is beautiful, so scenic that I lost track of time. I was happy to note at Pangboche that I can no longer enjoy the modern world connectivity as from here on there will be no networks.

Our next destination was Thukla and we have to start early. The journey was just like it was supposed to be; scenic and beautiful. I crossed village Phirtse where I rested for a while and refilled my empty tummy.

Walking up the Great Khumbu Valley

Pheriche also has a helipad, which in fact is the most beautiful helipad I have seen in my life.  And watching a helicopter landing was an amazing photo opportunity which I quickly grabbed with my cameras.

To reach Thukla, I had to cross a river which has no bridge. The water flow was also quite fast, and I had to play some of my childhood games for crossing. Jumping over rocks, and walking fast, I finally managed to cross over, but my shoes and socks were all wet and cold because of the freezing waters. It was all cloudy and I could see nothing, so I decided to call it a day and quickly got into my sleeping bag hoping for a clear sky the next day.

Luckily the next morning was bright and sunny. And I could enjoy the beautiful panoramic view of high altitude mountains which was hidden last day because of cloudy weather. It was mesmerizing, I once again got lost in the beautiful sight and forgot to finish my breakfast and coffee which got cold; I finally gulped it down as cold coffee though.

Standing at the Mount Everest Base Camp at 5364 meters

It was freezing this morning; higher altitudes meant low temperatures and high speed winds. And as usual and recommended in high altitudes, we took an early breakfast and hit the trail again. Also today was going to be a long day as it involved reaching Gorakshep first and then trek to Everest Base Camp and come back to Gorak Shep for night halt.

The trek to Thukla Pass was quite tricky. Crossing any pass is always tough; you have to first climb and then descend. Once I reached the top of the pass, the sights all around helped me forget the pains I had in climbing the pass. My camera went clicking non- stop. And I captured all the beautiful mountains around in my camera.

Exploring Kalapatthar and Gorakhshep Village in the Everest Base Camp Region

The first destination of the day, Gorak Shep was still 4-5 hours away. Resting for a while after every hour, making salty tea and restoring my energy, I finally managed to reach my first stop at around noon, leaving us about 6 hours of daylight to go to the base camp area and come back. The base camp is only about 2 kms from here, but it usually takes more than one hour to cover this distance because of the climb.

It was freezing, the temperature being 13 degrees celsius, and the height 5346m, and I was shivering even with 6 layers of clothes on me. The excitement in my heart of reaching there made me shriek.

I forgot the altitude and the low temperature. I was standing at the Everest Base Camp and that was an exhilarating feeling.

I forgot about the time, and was suddenly shaken by my porter who reminded me that we have now to get back to Gorak Shep. So we headed back downhill and after about 40 minutes of trek reached our night halt.

The next morning was also going to be exciting and challenging. The destination today was Kalapather, from where I can clearly see Mt Everest. Kalapathar is the highest point of this trek, and we had to start in wee hours in the morning. At this altitude, this is of prime importance as after the sunrise, the sky gets hazy and getting a glimpse of Mt Everest is almost impossible. 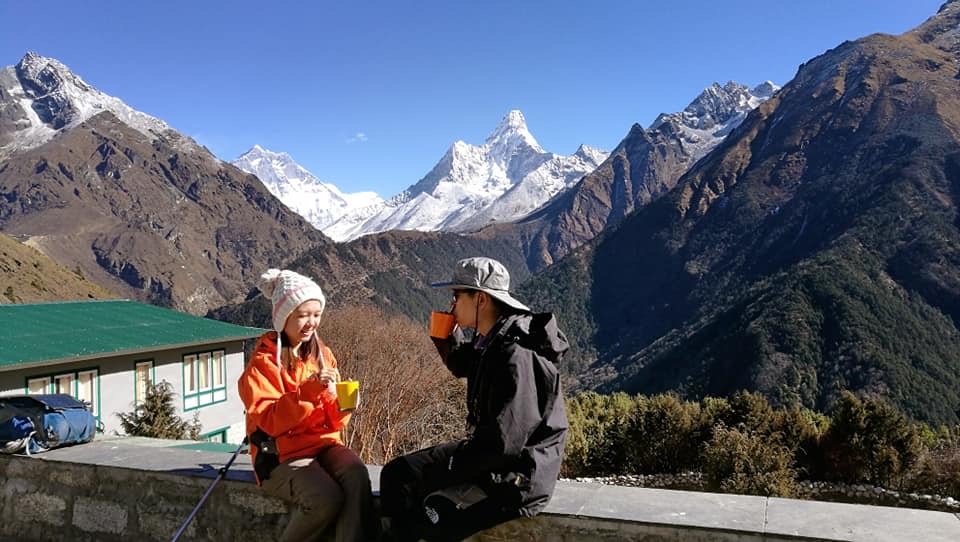 I woke up at 3 Am in the morning and started the trek with my guide. It was freezing cold there at that time, and we were trekking upwards. I was unable to move, my hands were entirely frozen; but the excitement of standing in front of the highest peak in the world pushed me on. I washed my hand with hot water from my thermos and finally reached Kalapather.

We stayed at Kalapathar for about an hour, and I was fully numb and fell twice as I moved. But you see, I had to start moving, and reached Gorak Shep to bid bye bye to my host and also to start for the next leg of my trek. Leaving this mesmerizing view of nature and going back down was quite heartbreaking, but the journey had not ended. I was now planning to reach Pangboche and to continue my quest to a beautiful lake Gokyo Ri in the Everest region.

Gokyo Lakes are famous lakes in this region. After reaching Pangboche, I decided to rest here for the day and then start for Phortse. Next day after a short trek of 3 hours I reached Phortse. It was a dramatic landscape on the way to Phortse, which was in the other direction from the Everst trek. It was a very narrow trail and no one was there at that time when we did the trek. 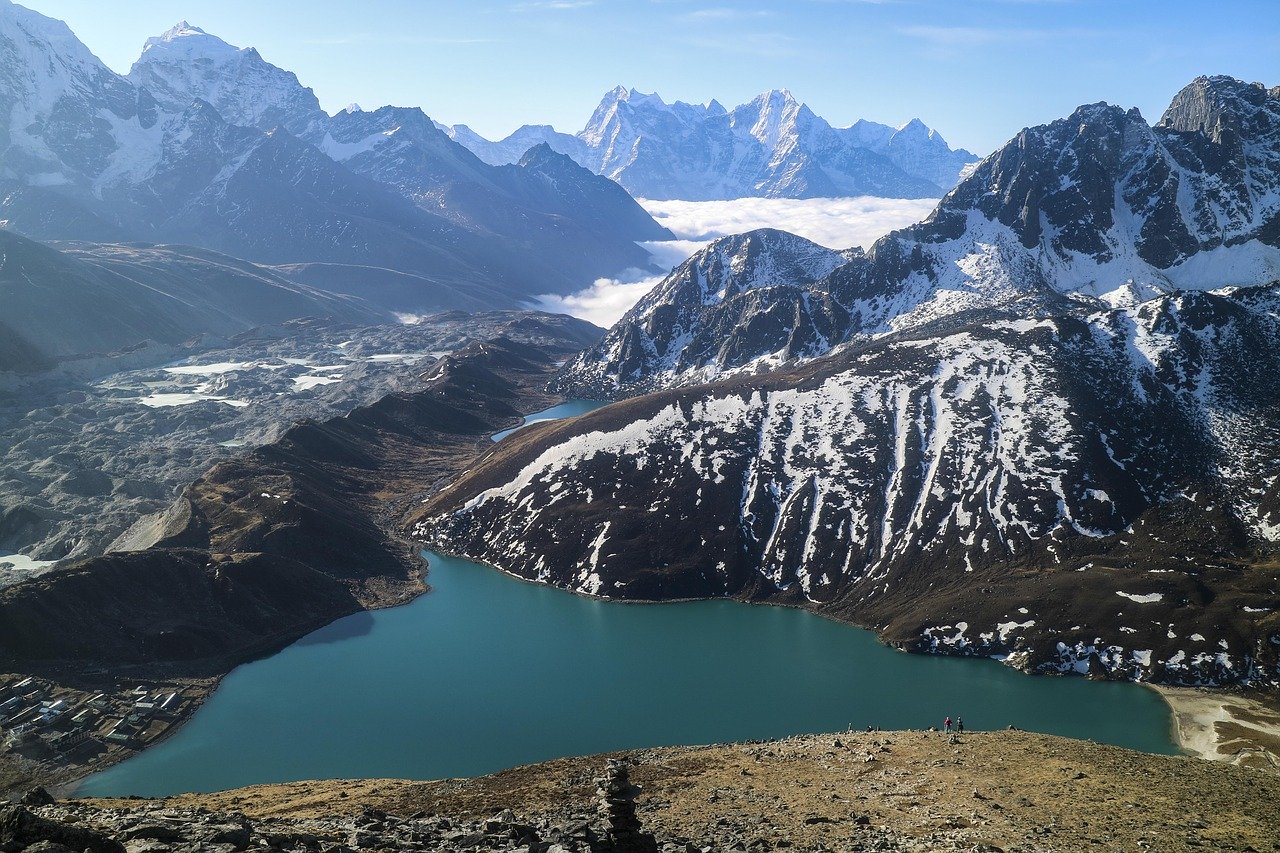 It was a risky decision to have come on this trail, but at the end of the day we did it. After reaching Phortse, I was amazed to see the untouched beauty of nature. Phortse is a village in the Everest region where very few trekkers come. I felt lucky that I went there and explored the local culture of Everest.

Next Day, we had to climb almost 4000 m in one day and I was not ready to do it without proper acclimatization. But I had to do it and had no time on hand.

Exploring the mighty Gokyo Lakes in the Everest Region

It was a beautiful day – I saw the best of landscapes, walked through the clouds, and played hide and seek with them, I saw white snow melting and converting into blue water.  Trekking in the Everest Region is an eye opening experience.

We met locals in villages where income from trekkers was not the only source of income. It was a long day; I trekked for about 12 hours to reach the Gokyo Lake.

There in fact are 5 Gokyo Lakes in Everest Region which are named as lake 1, lake 2, lake 3, lake 4 and lake 5. I went up to Gokyo lake 3 which is the main lake. The 4th and 5th lake are located on very high altitude, and there is no proper trail for that. I luckily got a room with a lake view at the Gokyo village near lake 3.

Mount Everest Base Camp and Gokyo Trek Compliment Each Other

Gokyo Lake and Everest Base Camp Trek have different trails, so it is upto the visitor to decide whether they want to explore the base camp, Gokyo Region, or both.

The view was straight out from a painter’s canvas and I felt as if I were in paradise. The view of the lake was mesmerizing.

After spending the night watching the beauty of the lake, I finally got a nap towards the morning. And then in the morning we descended back to Namche Bazar and Lukla, and then flew back to the polluted lives in the modern world.

Click to explore the Everest Base Camp Trek by yourself. You can also explore several trekking and hiking activities in the Everest Region.

– A blog by Gabriel Baicus