Gosainkunda Trek is one of the most popular spiritual treks in Nepal, especially among domestic trekkers. Gosainkunda lies in the Langtang region which is proud of having Nepal’s first Himalayan national park also known as Langtang National Park. Gosainkunda trek offers you the spectacular natural scenery, a glimpse of panoramic views of snow-capped mountains, diverse flora and fauna, and rare wild animals.

Gosainkunda trek offers you the breathtaking scenic beauty of about 108 lakes in the vicinity that bestride at an altitude of 4,380m. The entire Langtang region is famous for Gosainkunda Lake which is considered as the holiest lake of Nepal. Over 25,000 Hindu and Buddhist followers visit Gosainkunda on a special occasion known as “Janai Purnima” that falls on August.

According to Hindu mythologists, Gosainkunda lake is well-known as the holy place to wash off the sins and pains of human beings. This lake is oligotrophic because of which fewer marine animals survive. The interesting fact about this lake is it is frozen during the winter season (December to February) because of which it is famous as the “Frozen Lake of Nepal”. Witness the purity of Gosainkunda lake!

The Trekking Trail to  Gosainkunda

Located in the north of the Kathmandu valley, trekking in Langtang Gosainkunda provides you the trekking trails covered with the spectacularly terraced slopes, diverse flora and fauna, dense forests decorated with pine trees, bamboo, rhododendron flowers, oak, and so on. The Langtang Gosainkunda trek arranged by the Hiking Adventure Treks travel company provides you one-day sightseeing around the UNESCO World Heritage Sites that lies in the Kathmandu valley such as Pashupatinath Temple, Boudhanath, Swayambhunath, and so on.

Pashupatinath Temple is the holiest Hindu Temple lies at the bank of Bagmati River, Patan Durbar Square is the old city of the Kathmandu Valley. Whereas Boudhanath Stupa is the world’s biggest Buddhist Stupa and Swayambhunath is popular as the Monkey Temple. Furthermore, the trekking trails pass through the delightful forest, beautiful mountainous scenario, and lush wild nature. As a leading travel company in Nepal, Hiking Adventure  is famous for professional and friendly tour guides and better arrangements.

After breakfast, we will join guided tour to visit various sites in the valley - most of them listed as UNESCO World Heritage Site. Get off and browse the famous Pashupatinath Temple, Durbar Square, Swayambhunath and Boudhanath. Come back to hotel and prepare for the morning flight, drive and short trek the next day.

We will have early breakfast and get on a bus to drive to Dhunche. It will take around 8 hours to reach there. The bus journey is full of

Once we arrive at Dhunche, we will spend the night and prepare for our trek for the next day.

After breakfast, we start ascending to reach the village of Deurali (2500m) and later to Chandanbari (3200m). Chandanbari is also called Sing Gompa by the locals. The ascend will be steep as we gradually gain height.

We will start pretty early in the morning after breakfast today. Enjoy Langtang view as soon as you leave Chandanbari. We will reach the small village of Cholangpaty. The path starts turning steep. Keep the body hydrated as you climb up. The most difficult and steep path of this section is beyond Lauri Bina until reaching the Buddha Stupa. After that, the trail is somehow straight. You pass BhairavKunda and NagKunda (ponds) before arriving at the main destination, GosainKunda.

Trek back to Chandanbari from Gosainkunda Lake (3200m, 4 to 5 Hours)

Enjoy the views of great mountains and serenity of Gosainkunda lake before enjoying breakfast and starting your back-trek journey. Gosainkunda is one of the holy lakes in Nepal. In fact, it is also the origin point of famous Trishuli River. Trek back to Chandanbari for 4-5 hours.

Today, we back trek for another 5 to 6 hours depending on your pace towards Dhunche. The trail is the same that we ascended a few days ago. Don't get fooled as the descend can be as challenging as the ascend. Make sure that you have proper trekking boots on and use hiking poles to reduce stress on your knees.

accommodation with breakfast at a 3-star category hotel in Kathmandu

Kathmandu city tour as per the itinerary

Meals (breakfast, lunch and dinner) with tea & coffee during the trek

Lodge to lodge accommodation during the trek

One highly experienced, helpful and friendly guide, porters (1 porter for 2 people) and their food, accommodation, salary, equipment, and insurance

Lunch and dinner in Kathmandu,

All cold drinks such as: alcoholic beverages, mineral water and beverages

Hot and cold showers during the trek

Tips for trekking staff and driver

An Overview of Tsum valley Trek  Tsum Valley Trek is also called renowned as the “hidden valley”, in the Nepal Himalayas…

An Overview of Beni Dolpo Trek The route of  The Beni Dolpo trek had remained hidden from foreign trekkers until 1991.…

The eastern part of Nepal the popular adventures route is called Rolwaling Trekking is a sub-range of the Himalayas. Rolwaling trekking… 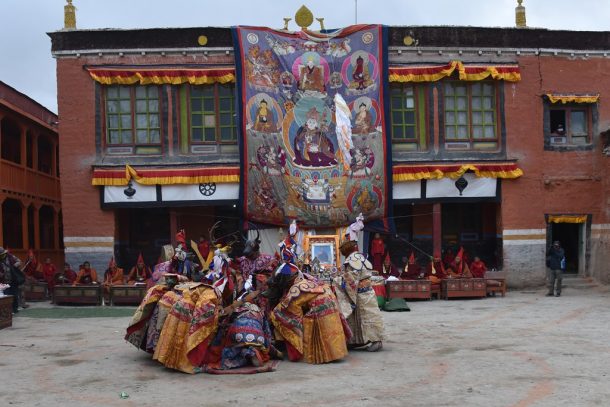